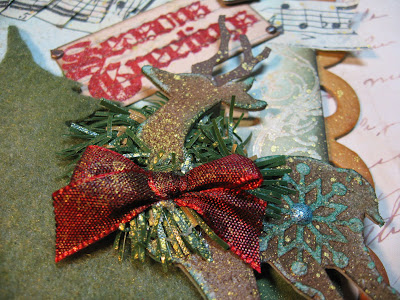 If you have been following along on my blog and my version of the 12 Tags of Christmas, you know that this is my final tag. I started with tag #7 along with Tim Holtz, the inspiration behind my tags. I got a late start so after I completed tags 7 through 12, I started back at the beginning with tag #1. My tags are actually pennants that will string together to form one long holiday banner. I'll be sure to post a photo of the completed banner, assembled and hanging in my house when I am done. 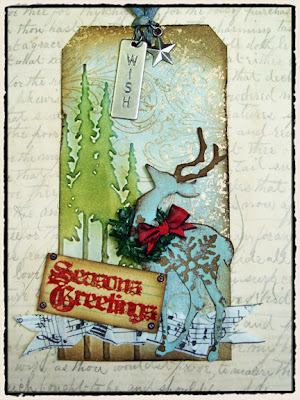 As I keep saying, you've got to go to Tim's blog and check out his step-by-step photos, techniques and videos he so generously offers us. I have learned SO much from playing along this year, as I did last year too. My favorite technique in this tag is his use of the snowflake texture fade on the die cut reindeer. So be sure to check that out. 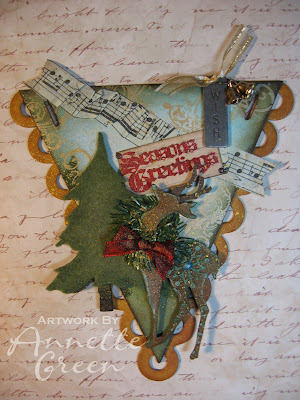 A little different take on the tag this time, especially with the color choice. I opted for a more traditional brown deer rather than the aqua colored one Tim made. (In this photo, the deer doesn't stand out very well, so be sure to click on the image for a better view.) I added a little aqua color to the embossed snowflake on the deer's body with a sparkly brad in the center. And while I really liked Tim's embossed trees on his tag, I didn't have that texture fade so I cut this tree from a die I had. I used some green felt rather than grungeboard to give it a little texture, but the felt was a little flimsy so I ended up gluing it to grungeboard after all. 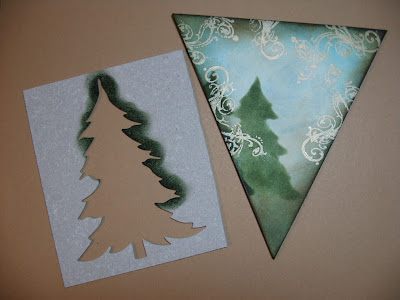 To back up a little, I wanted to mention that I used the negative space from the die-cut grungeboard to create a stencil effect for a background. It's fairly subtle in the photo, but helped give a little dimension to the main tree area. 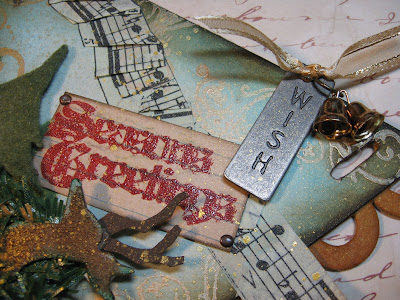 I'm pretty sure I stuck this musical note tissue tape upside down, but oh well, it's too late now. I like using tissue tape. It's fun stuff and easy to use.

Here's another look at my tag. You might have noticed some splatters of gold on mine. I decided in the end that this one needed some flecks and since I didn't have that cool splatter stamp Tim used, I just spritzed all over with gold spritz. I thought I'd be sorry I did that, but I really like how it turned out.


Thanks again for stopping by and checking me out. I've had such fun creating these pennants, and have learned a great deal along the way. I hope you have been inspired and learned something too.
Posted by Annette Green at 9:26 PM 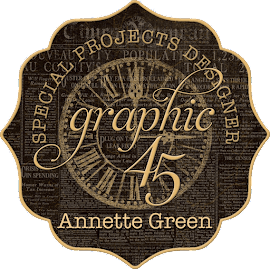 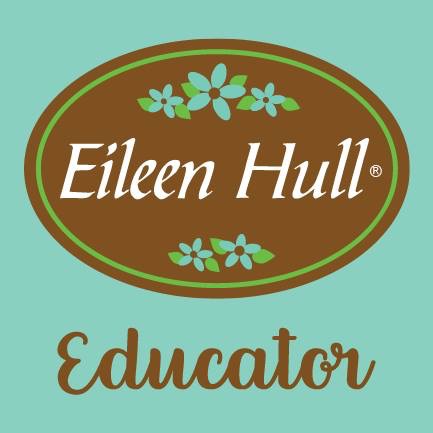